Previously we wrote about the pleasures of visiting the island’s capital – Lefkas Town.  Despite Lefkada’s small size the capital isn’t the only place worth a visit.  The island offers a number of charming villages that make for an enjoyable and relaxing half-day trip.

Two of these are Sivota and Vasiliki.  Vasiliki is the larger and sits on a huge bay with a reputation for some of the finest windsurfing in the world.  It has a rare combination of wind and waves that caters to beginners, experts and all levels in between.

You can read more about the superb windsurfing in Vasiliki on our Facebook page at: https://www.facebook.com/VillaGabriellaLefkada/posts/1448046632120763

Aside from the world class windsurfing Vasiliki has a wide choice of quayside tavernas offering traditional Greek food and fresh, fresh fish.

You can also take a wander along the quaint main street with some good artisanal shops.

The village also boasts a very pretty church and one or two interesting artefacts (well interesting if, like me, you like BMW flat twins!)

Sivota is smaller than Vasiliki and is best known for its fantastically sheltered harbour.  This makes it a stop of choice for yachts sailing around Lefkada and the Ionian islands.  In high season you’ll find the quayside jammed with yachts with many more anchored in the bay.  The tavernas will be packed in the evenings with yacht crews and guests on sailing holidays giving the atmosphere a real buzz.  Off season Sivota is a rather sleepy place with a wonderfully relaxed vibe – the perfect place for a stroll and a leisurely lunch.

Both Vasiliki and Sivota are about 25 minutes from Villa Gabriella.  It’s a pleasant and picturesque drive that takes you through the hills and which passes the highly recommended Lefkas Earth winery http://www.lefkaditikigi.gr/index.php?l=2#!/ that we featured in an earlier blog.  If you have the inclination it’s well worth the time to stop, tour and taste their wines.

Just a five minute drive from the luxury of Villa Gabriella brings you to the tiny village of Rachi. Despite its size Rachi offers a wonderful taverna for lunch or dinner.  The menu combines Greek and Ionian traditional cuisine with some contemporary twists under a wonderful shaded canopy.

Another three or four minutes gets you to Nidri.  Nidri’s  charming high street has many interesting shops, including wonderful bakeries and a fabulous fresh fish shop.  The quayside gives you a wide choice of restaurants offering Greek, Italian and International cuisines.  And of course you’ll find any number of cafes on both the high street and the quay.  Nidri’s beach has safe swimming, offers a wide range of water sports and is on the Blue Flag list for beaches reaching the very highest standards of cleanliness.

Whether you’re seeking relaxation on the beach; excitement on the water; browsing the shops or a great meal out then you’ll find what you want in Rachi and Nidri before your short drive back to the luxury of Villa Gabriella. 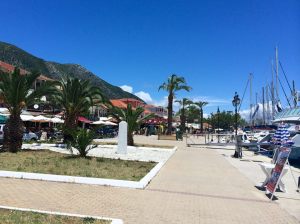 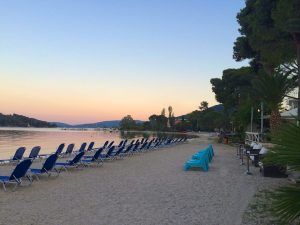 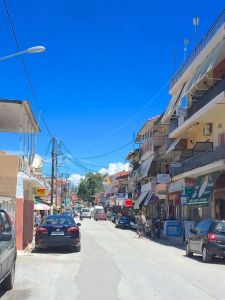 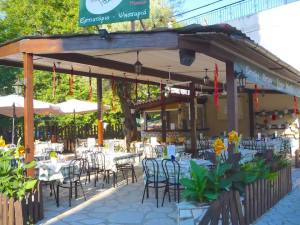 Villa Gabriella’s fabulous views across the Ionian mean that you’re just a short drive from some fantastic sailing. Known for their consistent winds, the waters off the east coast of Lefkada a great opportunity to learn to sail. Or, enjoy a relaxing day on the water with a skippered charter (a great way to find some of the best spots) or, for the suitably qualified, organise a bareboat yacht charter.

You’ll find a number of operators on the east coast of the island from Lefkas Town to Vassiliki who can assist with your arrangements.  Of course Lilias, Villa Gabriella’s massively knowledgable manager, will be pleased to help you make the best plan for your holiday.

A typical day might start between 9.00 and 10.00 a.m. The drop anchor in one of the beautiful bays along the coastline – many with beaches only accessible by boat – for a mid-morning swim. It’s not uncommon to find you have the entire bay to yourselves so you can experience real privacy and solitude.

After a swim you might head for a quayside Taverna lunch, perhaps on Meganisi, before enjoying the best sailing winds in the afternoon. You’ll usually be back in port at around 6:00 to 6:30 p.m. having experienced more of the beautiful Ionian and the pleasures of sailing.

However you choose your day or two sailing it’s another of the great opportunities offered when you rent the luxury of Villa Gabriella. 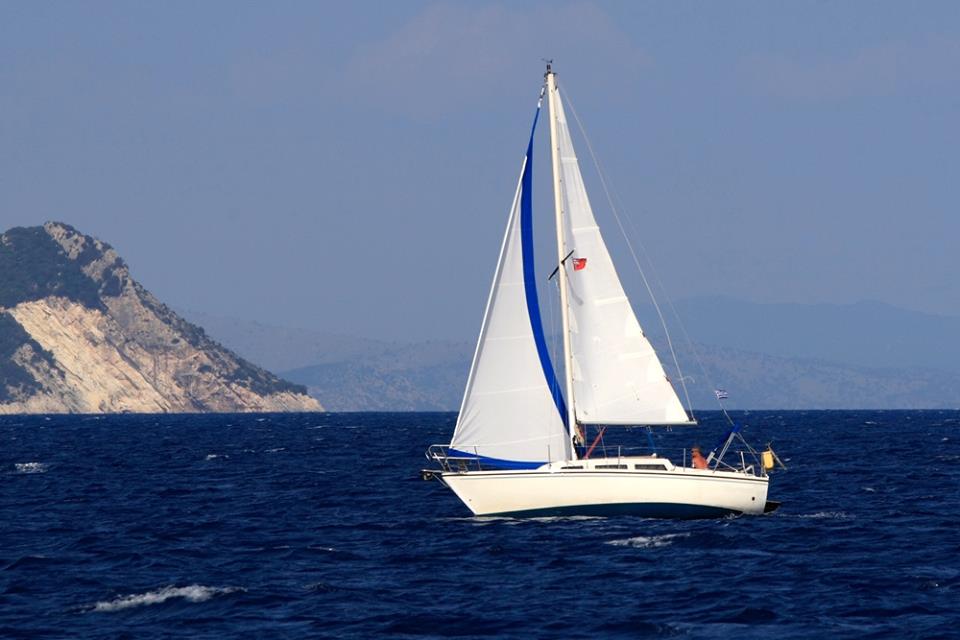 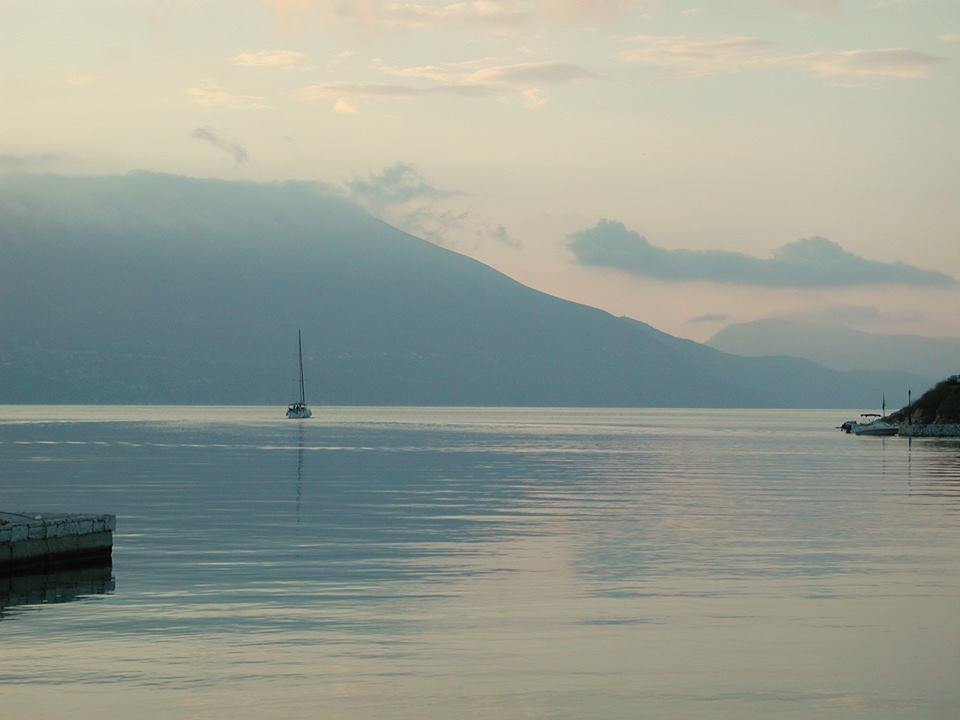 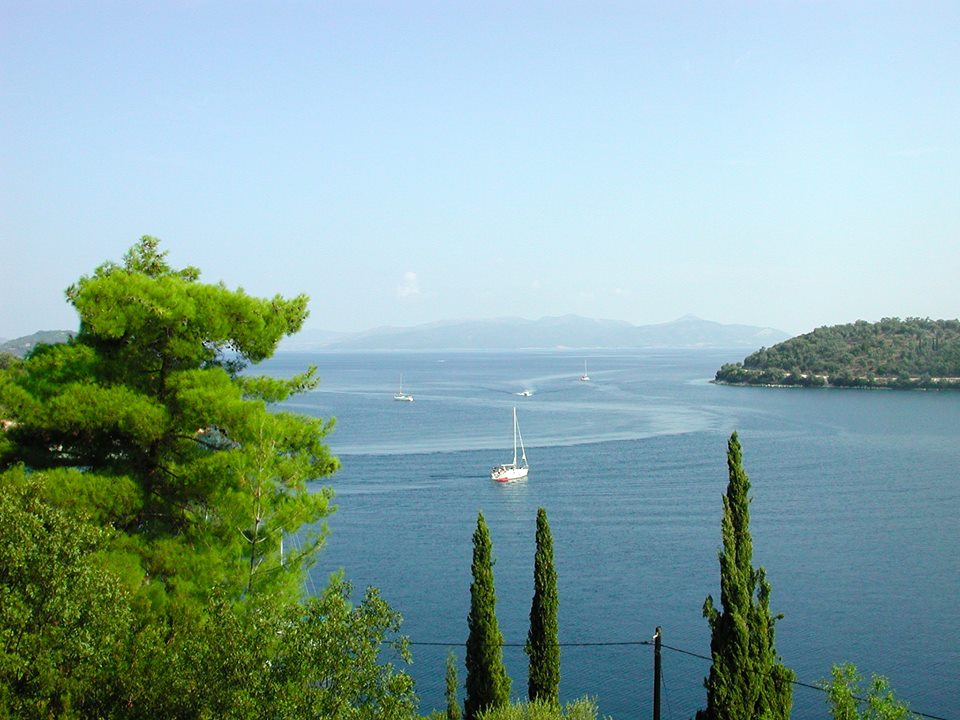 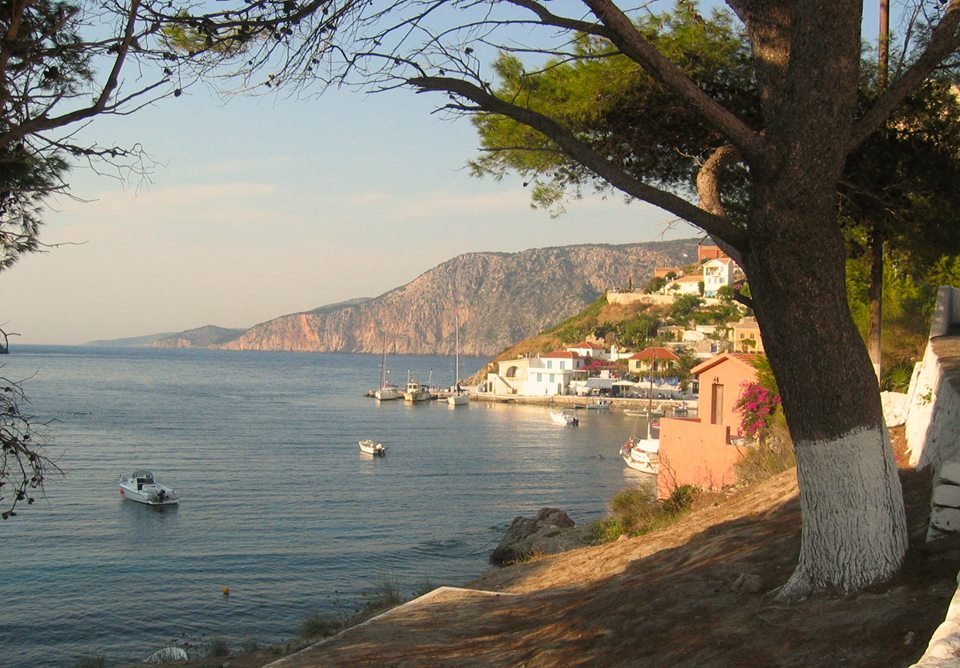 With a population of 14,000 the town is the commercial hub of the island with a thriving choice of shops and restaurants. The new marina and the old town quay flank the town and are a buzz of activity during the summer sailing season.

Despite the destruction of much of the town in the 1948 and 1950 earthquakes some traditional houses can still be found. Characterised by their brightly coloured wooden structures these houses are a vibrant reminder of the island’s past.

The main shopping street runs through the centre of the town to the harbour.  It’s pedestrianised making for a relaxing stroll along the street. The evolution of the town means you’ll find a jumble of shops.  Greengrocers alongside clothing boutiques and butchers and fishmongers rubbing shoulders with ironmongers and modern electronics stores. Interspersed amongst them all you’ll find numerous cafés where you can pass the time people watching over a cappuccino or the locally loved “Frappé”.

At the harbour end of the street you’ll find a concentration of restaurants and bars offering a wide choice of traditional and contemporary Greek cooking.  There’s a strong emphasis on fresh local fish.  And you can wash your meal down with a cold Greek beer or one of the good quality Lefkadian wines.

Given its relatively small size Lefkada lays on a surprising number of festivals and events throughout the year.  Should you be lucky enough to be staying at Villa Gabriella whilst one of these is on then they are well worth a visit. In the summer you’ll find the festivals of Art and Literature and the Lefkada International Festival of Folklore and Dance.  The latter attracts both performers and visitors from around the globe.

Within the town you’ll find the Archeological Museum with exhibits from excavations around the island that date back to the proto-Hellenic period and encompass the Roman era as well. Many of these were the proceeds of the work of Wilhelm Dörpfeld (see below).

Rather quirkily Lefakda also boasts a Gramophone Museum whose contents are, not surprisingly, centred on music. So if you hanker for the era before the ubiquitous iPod then this might just appeal!

Within the town you’ll also find a couple of historic churches. The Church of the Presentation of Virgin Mary was built in 1720, during the period of Venetian rule. Inside you’ll find interesting and historically significant hagiographies by Lefkadian artists from the early 19th century. Or try the Christou Pandokratora Church that dates from 1684 – built by the Venetians as a reminder of their victory against the Turks.

Venture a few kilometers outside the town and you’ll find the ruins of the ancient city of Nirikos, the island’s original capital, dating from the 2nd millennium BC. Nirikos is believed to have been a large city of significant economic importance in the region at the time. A new city was later built on the same site, taking the name Lefkas and becoming Lefkada’s capital in the 13th century.

Here today you can see the remains of old fortress’ walls; the ruins of a pre-Roman theatre; an aqueduct and parts of an ancient cemetery. These were largely uncovered by the German archeologist Wilhelm Dörpfeld (1853-1940).  Dörpfeld was famous for his excavations around Greece but especially on Lefkada where he settled and eventually died. He spent much of his career trying to prove his theory that Homer’s epics were based on historical facts including that the bay of Nidri, was in fact Ithaca, home of Odysseus. For more information on Dörpfeld and his work see http://en.wikipedia.org/wiki/Wilhelm_Dörpfeld

Whether you are fascinated by ancient Greece and Greek legend; the Venetian period or the modern array of shops, restaurants and festivals that Lefkas has to offer then a day out in Lefkas town is a highly recommended part of your stay at Villa Gabriella. 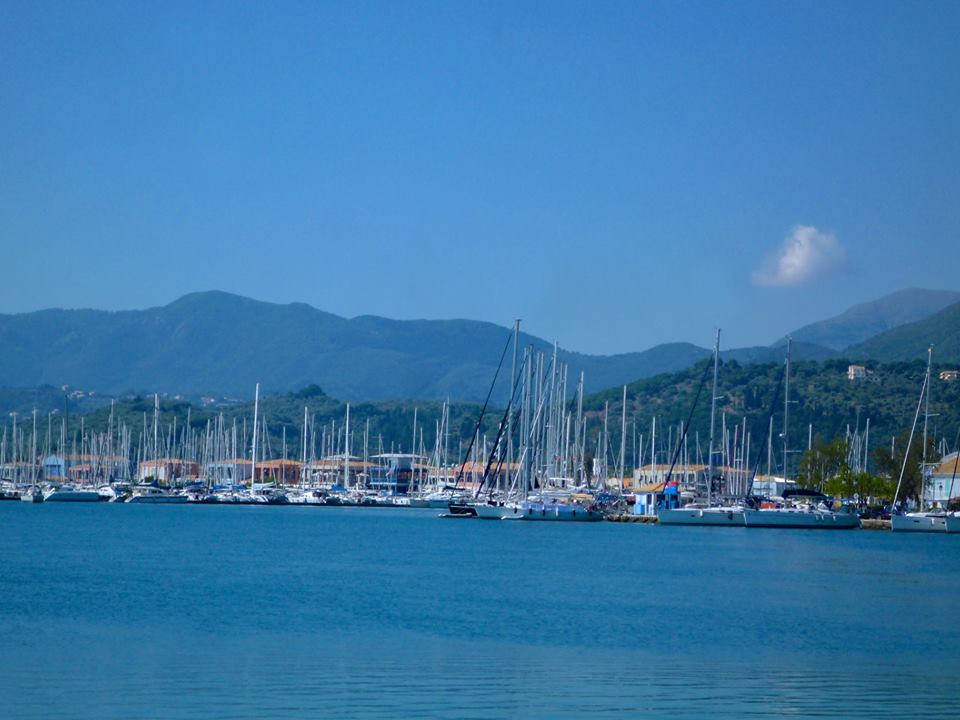 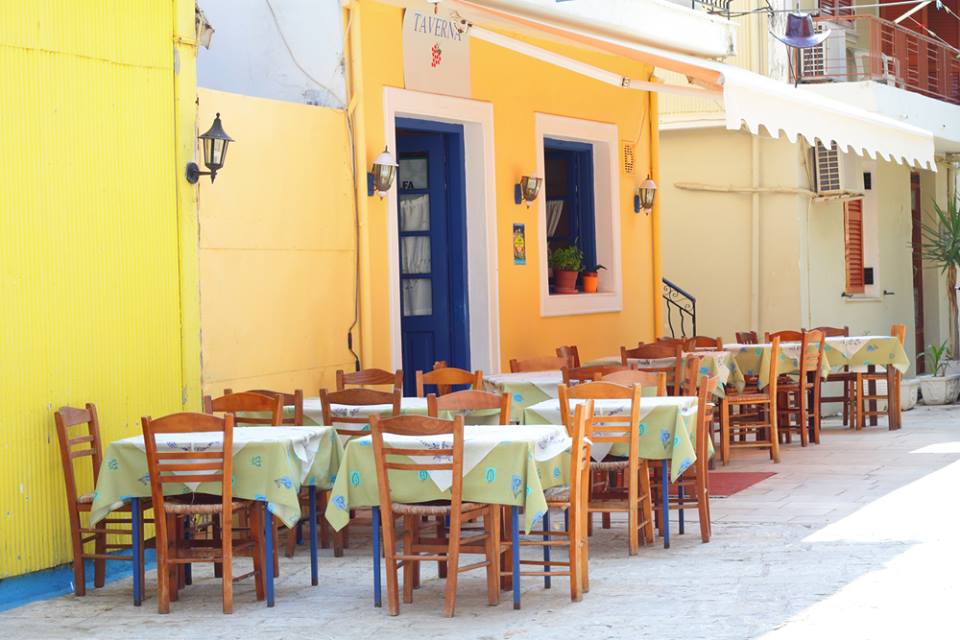 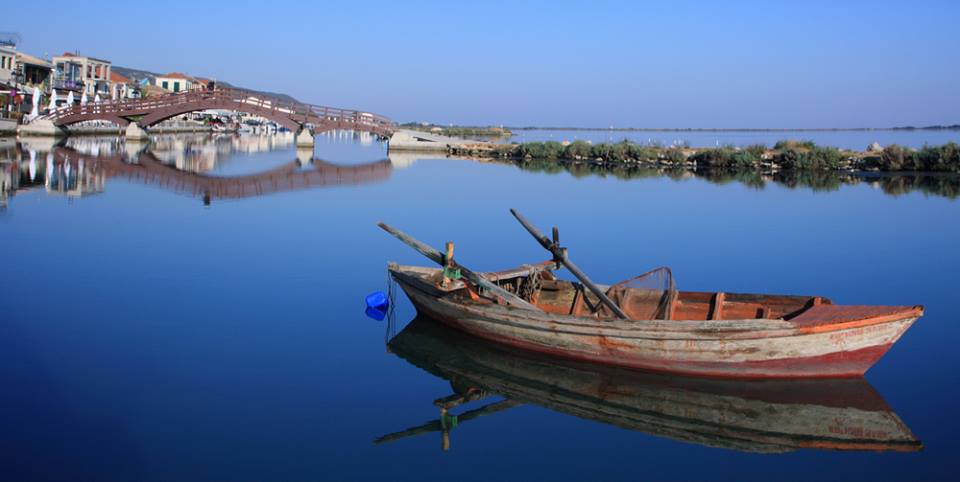 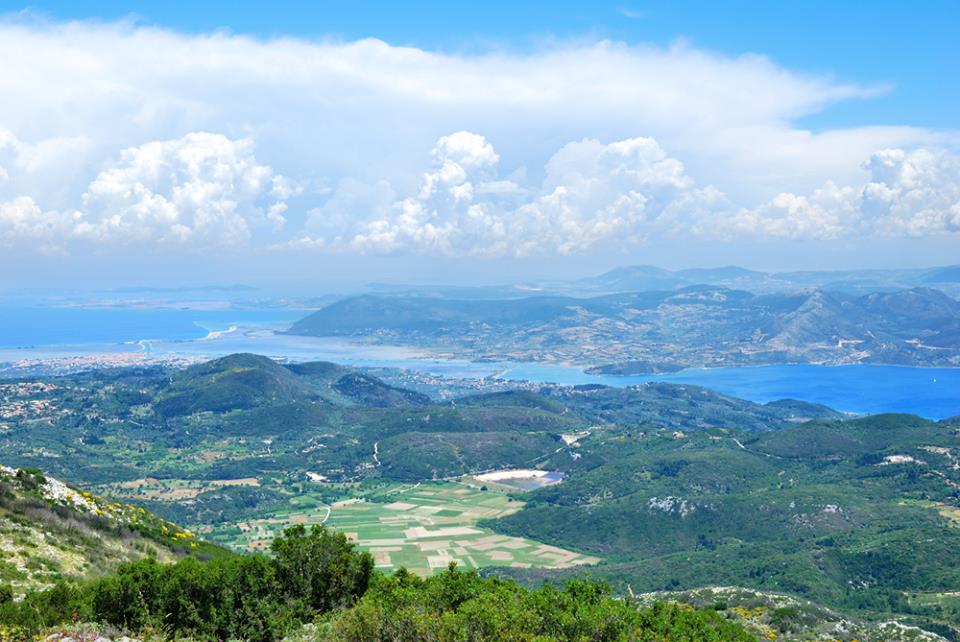 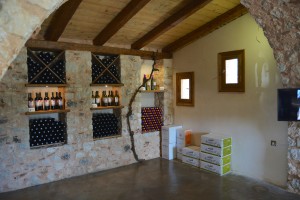 The climate on Lefkada with its wetter winters and hot dry summers creates a climate that helps produce some of the finest wines in Greece.

A visit to some of the wineries during your stay offers the opportunity to buy something to help wash down your dinner whilst gazing at the view from Villa Gabriella’s dining terrace.

Lefkada is famous for its prize-winning wines and the history of viniculture on the island dates back to antiquity. The most commonly found varieties on Lefkada are Vardea and Vertzami. The white Vardea is more commonly grown in the southerly villages of the island including Agios Petros, Sivros and Vassiliki. This grape originates from Italy, in this case Tuscany. It’s rather less common in viniculture although this golden skinned grape is found in sweet wines from the north west of Italy. On Lefkada however the wine makers turn it into a fresh dry white wine that is a great accompaniment to locally caught fresh fish. But it also works with Feta – balancing the naturally salty and tangy characteristics of this Greek cheese.

Vertzami though is a grape commonly found in Greek vineyards. It’s widely cultivated in the central areas of Greece and Cyprus – where it is actually known as “Lefkas” – despite it too being originally imported by the Venetians. It produces a wine with a deep red colour.  Well-made examples exhibit bay leaf, cinnamon and berry aromas that balance good acidity and typically deliver high levels of alcohol. Find one in a local restaurant that is serving the traditional Greek dish of Stiffado, and you’ve found a perfect match of plate and glass! If you take it home to try, pair it with some local lamb grilled on Villa Gabriella’s barbecue.

You’ll find a number of wineries to visit on the island, each with a passion for their products.  Simply Google “Lefkada wines” – you’ll get enough links on the first page to have you in a different winery each day the week. But just to get you started here are a couple of choices.

At Lefkas Earth wines they have their own visitor centre that’s open daily throughout the summer. Located on the road between Nidri and Vassiliki, about 20 minutes from Villa Gabriella, the facility is worth a visit to learn a little more about Lefkadian viniculture and sample their wines. 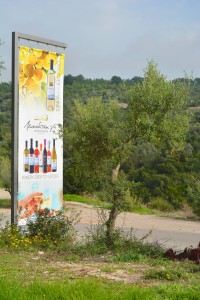 You’ll find an equally fascinating experience after a memorable drive if you choose to visit “Siflogo” winery located in the village of Platistoma high in the hills of the interior.  Again this is about 20 minutes drive from Villa Gabriella. The drive offers several opportunities to take in a range of spectacular views as you wind your way through the interior of the island. To visit Siflogo you need to book ahead on 26450 41674 or 697 321 7833.

Whether you visit either of these wineries, or any of the other choices, as you hunt your own wines from the source; or whether the local supermarket is your choice – please take the chance to sample the Lefkada wines – they are worth the effort and they suit the local food perfectly. 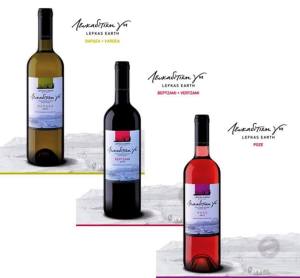